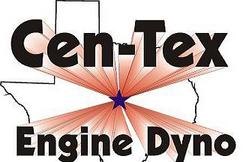 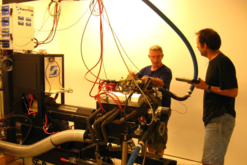 Call for a appointment

When testing engines, one of the things that was bothering me was depending on the sweep rate the engine would give a different HP and toque numbers. The most accurate test is a step test.  For example the step test goes to 4000 RPM holds for 3 seconds then goes to 4300 holds for 3 seconds repeating unit the test is done.

The reason the numbers are different in a rpm sweep test is it takes energy to accelerate the crankshaft, flywheel, driveshaft and brake. Now this “energy” is “stored” and if you attempt to slow down an engine that is at speed, you also have to slow the crankshaft, flywheel, driveshaft and brake, the engine will show higher HP/Tq then when it accelerated.

I approached Superflow with this issue and 6 months later they added an inertia correction factor, known as STPIPw and STPiTr.

How do you determine the engines “Inertia factor”. You run a special sweep up and down, doesn’t have to be at full throttle. The results will show the acceleration Hp is lower than the decell Hp. We then use the “post processing” to adjust the Inertia factor. Now if you Inertia factor is right the HP lines will lay over each other, because we are correcting (by adding) for the energy being stored during accell and correcting (by removing) during decell.